Ikebana (生け花) is the Japanese art of arranging flowers. Translated it means "living flowers". The meditative form of Ikebana is called Kadō (華道 "Path of Flowers"). Both students and teachers of Kadō are called Kadōka (華道家).

In ikebana, flowers and twigs are arranged in bowls or vases. Ikebana is not just about setting flowers, it means more:

An ikebana arrangement is a work of art inspired by nature. With the fine lines of swaying grasses, a gnarled pine branch or a budding flower, we can represent the diversity we encounter in nature every day. It does not take a whole tree to show the delicacy of cherry blossoms - a twig is enough. If this twig, the leaves, and the blossoms are given enough space, they can unfold all their beauty and uniqueness. They should all be arranged into a harmonious work of art in an ikebana arrangement.

Harmony is the soul of an arrangement that radiates tranquillity and inspires contemplation. The natural beginning is expressed as well as the passing away. Ikebana is a path. Eternity is foreign to the Japanese art of flower arranging, for nature and life are subject to constant change.

The art of ikebana is always evolving. Modern, sometimes very abstract arrangements have their place just as much as traditional forms that have amazed the viewer for over a thousand years. The different schools of ikebana cultivate different styles, but the basics of ikebana art are the same everywhere.

The admiration of beautiful, naturally blooming flowers has been ubiquitous in the East and West since ancient times. In addition to looking at them, we can feel the energy or spirituality of the flowers and trees themselves. In Shintoism this is understood as a symbol of the divine, or yorishiro (依り代). In Buddhism, the area in front of the image of the Buddha is decorated with colourful flowers to replicate the world of the Pure Land. Later, offerings consisted of flowers, incense and candles, known as mitsu-gusoku (三具足). The origins of the emergence of ikebana began in the reverence for nature in Shintoism and the offering of flowers in Buddhism.

During the Heian period (784–1185), a variety of recreational activities revolved around the popular interest in flowers and plants, including botanical games and competitions organised by local circles and groups. These events were usually called hana awase (花合わせ) in which players competed to identify and match flower species with either a poem or a particular season. Other popular games developed later as variations of hana awase.

The tatehana (立花 "standing flowers") of the mitsu-gusoku was the earliest form of flower arrangement. In addition, decorations based on Buddhist floral indications were arranged as decorations for waka and renga poetry sessions. The dōbōshū (同朋衆) was an office or title of a person who was responsible for interior decorations such as flowers, tea ceremony, etc. in the Shōgun’s palace. The monk Ikenobō Senkei from the Rokkaku-dō specialised in flowers and collected and wrote on the subject. The flowers, which were originally offerings and decorative elements of the altar, were in time appreciated and recognised as works of art in its own right. Both the office of the dōbōshū and the monk Ikenobō Senkei were first mentioned in the Muromachi period.

When the turbulent period of the Sengoku period (1477–1573) came to an end and Toyotomi Hideyoshi (1537–1598) unified the empire, rikka (立花) appeared as ceremonial decoration in samurai residences. Rikka evolved from tatehana. The arrangements became large and luxurious because they decorated the reception room of the residences and the daishoin (大書院) hall of a daimyō residence. In the courts of Kyoto, rikka with magnificent flowers were often placed in the inner palace (内裏 Dairi), Sentō Palace (仙洞御所) and official residences, which were suitable for the social gathering of people of refined culture. When the Tokugawa shogunate was established in the early 17th century, a new trend in aesthetics emerged under the reign of Emperor Go-Mizunoo and Empress Meishō during the Kan'ei era (1624–1644). Known as Kan'ei culture (寛永文化), this period emphasised the importance of elegance in beauty and focused on simplicity, fine design and a revival of and reverence for traditional rituals, ancient art and classical literature. This "essence of elegance" flourished at the imperial court and grew in importance through works by artists and aristocrats. In the field of flower arranging, Ikenobō Senko received the support of the emperor. In the early Edo period, Kan'ei culture reached its heyday, involving almost all social classes from aristocrats and samurai families to monks and city dwellers.

New school styles developed in the emerging metropolises of Osaka and Edo, modern-day Tokyo. Flower arranging spread through the social structure, from the aristocracy and samurai warrior class to city dwellers and wealthy peasants.

While luxurious rikka were presented in the prestigious rooms of mansions and temples, simple and plain nageirebana (抛入れ花) and seika (生花) gained popularity in the rooms of ordinary machiya houses. A large number of writings with pictures were published and ikebana experienced rapid growth and spread.
The Meiji Restoration from 1868 brought great change and turbulence to Japanese society. Modernisers regarded parts of traditional culture as outdated and praised Western culture. Conversely, as new Western influences came to Japan, traditional Japanese culture became better known in the West. Ikebana was spread worldwide as a Japanese cultural value. Moribana (盛花) developed during this time and became popular. Ikebana was actively included in school lessons for girls. With the modernisation of art, ikebana also changed and avant-garde works emerged. In many ways, from traditional style works to modern free style works, the new age ikebana developed and avant-garde works emerged.

Today there are thousands of schools with millions of people practising ikebana, in Japan and around the world.

When flowers are brought into a room to be admired, a vessel is needed in which to hold them, such as vases, bowls, cylinders or baskets. Even before the establishment of ikebana, Chinese-style vases, such as precious and rare bronze and celadon works, were highly prized. This changed over the centuries and vessels made of plain and earthy ceramics with imperfect-like surfaces from Japanese production became more popular. This Japanese style complemented the selection with its contrast to smooth and symmetrical Chinese ceramics. In the field of bamboo baskets, there are also objects in both Chinese and Japanese styles.

In ikebana, it is important not only to select the flowers and plant material but also to combine them with the appropriate vessels. Vases are chosen according to the style, such as the rikka, seika or chabana. The aim is to achieve perfect harmony of flowers and vessels and to create a holistic work of art of balanced aesthetics. The concept of ma (間) plays an important role in this.

The earliest arrangements were flower offerings in front of Buddhist altars. The form that developed from this is called Rikka (立花) at Ikenobō or Shōgonka (荘厳華) at Saga Go-ryū. It is a formal and impressive style developed for ceremonial occasions in the religious tradition and is based on the principle of Rokudai. 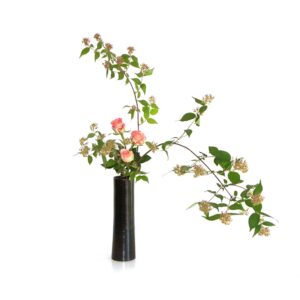 A classical form consisting of a conceptual triangle representing heaven, earth and human is represented in some schools. In many schools this form is called Seika (生花) or pronounced Shōka in Ikenobō, and in Mishō-ryū it is called Kakubana (格花). The schools practise different variations of this basic triangular layout principle.

Morimono (盛り物) is a classic form that combines vegetables or fruit with flowers. It is considered by some a sub-form of Bunjinbana (文人花, "literati flowers").

Moribana (盛り花) is a style often made in shallow vessels. It was developed at the end of the 19th century with the growing western influence.

Jiyūbana (自由花), also pronounced Jiyūka, is the free style that developed in the 20th century and offers the most flexible design option within the rules of ikebana. It is also known as Shinka (新花), Shinbana or Gendaika, depending on the school. Very modern forms also use dried or bleached plant material and/or non-plant material in combination. 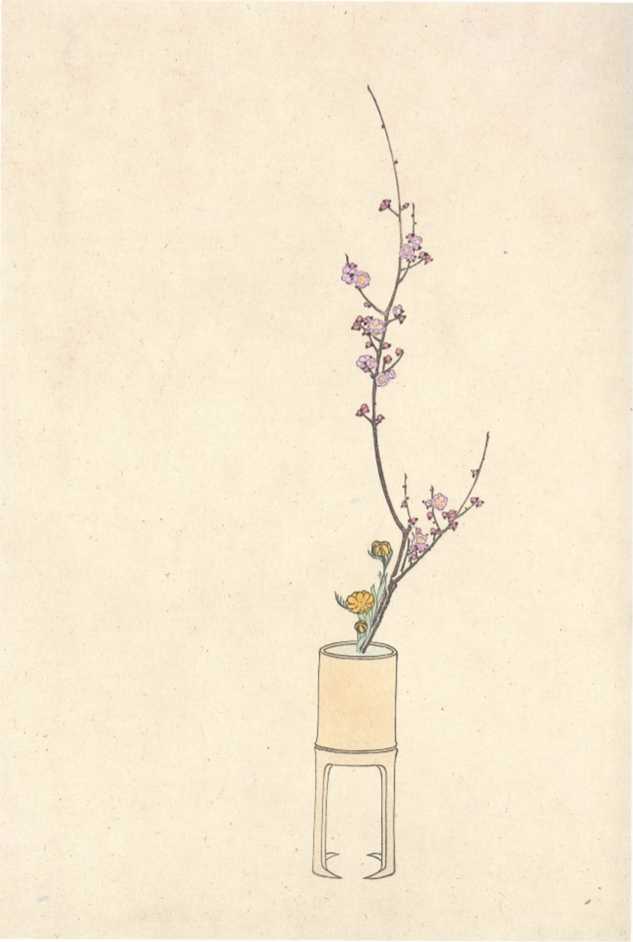 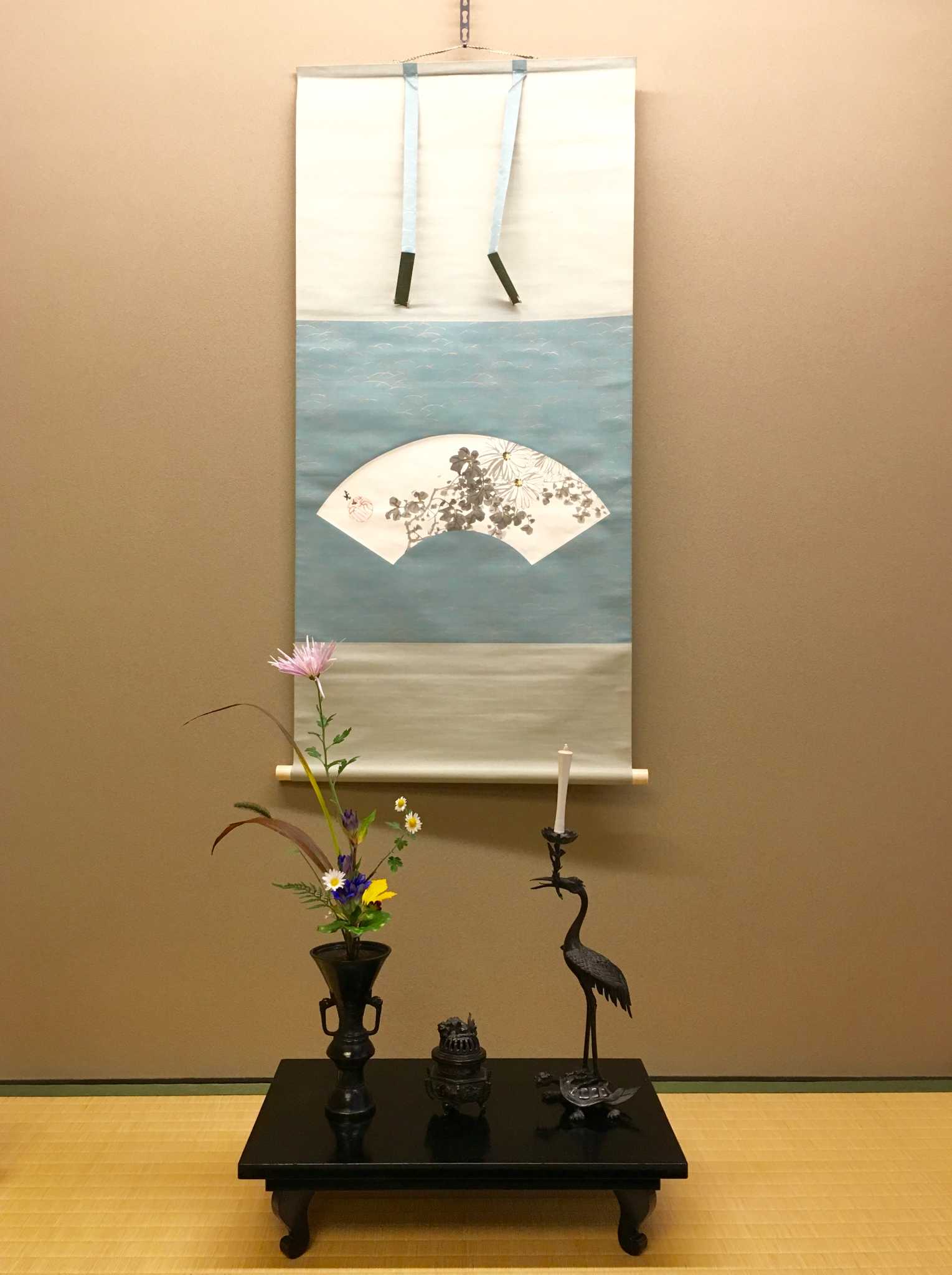 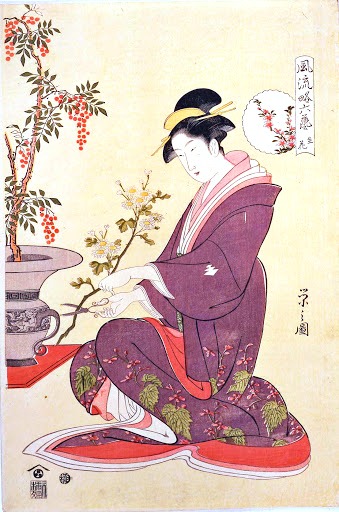